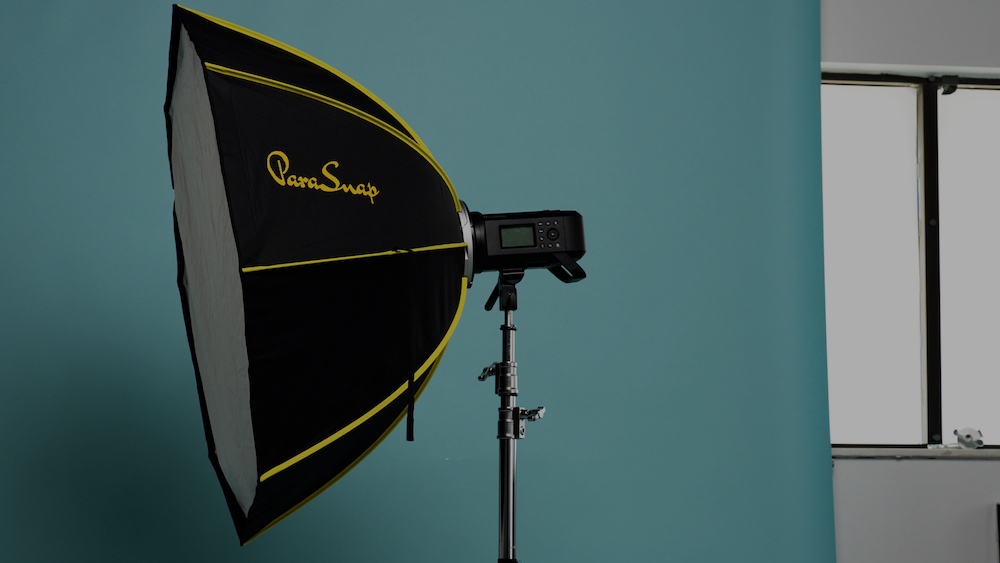 Glow has recently launched the new Parasnap Softbox for photographers. This is a completely new design, placing an emphasis on speed, portability, and ease of use. This octabox is available in two sizes — 36” and 44”. The Parasnap is universal, compatible with lights such as the Flashpoint R2 Series, speedlights used with an S Bracket, Broncolor, Profoto, and more. After trying this softbox for the past month, I’ll be sharing my thoughts on what you can expect from this new addition to the Glow lineup.

Most quick-open softboxes use an umbrella mechanism to open and close. This requires photographers to either remove all the diffusion to get to the umbrella mechanism. Photographers can also reach in through a side pocket, between the umbrella ribs to release it from the back. The price is either time-consuming or strenuous — neither of which is fun during a shoot. The Glow Parasnap Softbox offers a unique alternative…

All you do is pull the half-ring, and the entire softbox will spring into position. Closing is just as easy. Simply hit the release switch and the softbox collapses. It has less tension than an umbrella softbox of similar size. Since you can close the Glow Parasnap Softbox from the outside, there’s no need to constantly remove and reattach the two layers of diffusion.

Another benefit of this opening mechanism is that your light is completely unobstructed, so it’s very easy to gel a strobe’s barebulb if you are looking to modify the color of your light.

Because the speedring collapses — making the mount in-line with the softbox rods — the Parasnap packs up flat and is more compact than any softbox of similar size. Compared to a 42” EZ Lock Beauty Dish, the 44” Parasnap takes about 1/3rd the space when collapsed. This makes it easier to store in equipment bags, and much easier to pack when traveling. Depending on the mount that you are using, the Parasnap can even fit into a document sleeve or laptop compartment in a rolling bag.

On the bottom of the Parasnap mount is a second release switch, which allows you to change the softbox mount. The Glow Parasnap Softbox can be used for practically any light. Typically, changing mounts on a softbox requires busting out a screwdriver and swapping at least four screws and washers. With the Parasnap design, you can switch a mount in less than five seconds without any tools.

The interior of the Parasnap features a surface called SterlingFibre. This texture is designed to more evenly distribute light throughout the softbox, reducing hotspots. I find I’m satisfied with the light quality even when using outer diffusion only.

This material is also more reflective than the softboxes in the EZ Lock family, such as the Deep Parabolic softbox, Beauty Dish softbox, and Quick Octa. Despite being larger in size, the 44” Parasnap puts out 20% more light output than the 42” Glow Beauty Dish Softbox.

The Glow Parasnap Softbox design will be most appreciated by photographers who travel a lot with Broncolor, Bowens, or Profoto mount strobes. All three of those mounts are large, and the compatible modifiers take up a ton of space when traveling.

I also think there are many wedding and portrait photographers out there who choose umbrellas over softboxes simply because of their size difference when closed. The Parasnap reduces the disparity significantly, and should convert some umbrella users.

Finally, if you are an Xplor 300 Pro user, you now have options for larger softboxes that will produce softer light. I know I’ll be reorganizing my lighting case to keep the 44” Parasnap in it all the time!

Article and Photos by Robert Hall